3air will provide more equal opportunities to people in Africa by providing connectivity, digital identities, financial services, and contributing to the local economy. There will be a lot of focus on the 3air community government that will have control over funds to support local projects.

General political instability in African countries is the primary risk we face. Many countries are led by corrupt political regimes. Additionally, frequent political changes could potentially mean disruption of our proceedings within a country.

Our advantage lies in those countries needing and wanting broadband. As of now, our technology is the best and only broadband solution for densely populated cities.

With over 10 years of local experience in this area and good government connections, we are confident we will successfully navigate this phase. After all, internet connection is one of the most important factors in a country's development.

There is also the field of the blockchain community, especially SKALE, as the platform we want to build on. The advantage is the truly global and decentralized nature of these communities, so they are quite insulated from local political shocks.

There is a lot of hot debate and political influence in the blockchain industry, but some pioneers, like Bitcoin and Ethereum, have already been officially declared non-securities even by the US SEC (Hinman, 2018). Either way, the decentralized nature of Ethereum and SKALE makes them more resistant to political disruption, while fast adoption by renowned organizations brings additional legitimacy to other projects running on the blockchain.

Sub-Saharan Africa is home to over 1 billion people. The population is young, with the mean age predicted to be below 25 years by 2050. Africa is the world’s largest free trade area creating an entirely new development path, harnessing the potential of its resources and people.

The regions are composed of low to high-income countries. The economic impact of COVID19 in Africa is severe and economic activity is estimated to have contracted by 2% in 2020, pulling the continent into its first recession in 25 years. (The World Bank, 2021)

The broadband market in Africa is estimated at $97 billion. It has the potential to grow by 4 times when it reaches the current global average broadband penetration rate.

Also, Africa has by far the highest urbanization growth rate in the world, with around 4% growth in urban population annually (The World Bank, 2021). This drives even more demand for broadband connections and therefore means that our market is constantly growing by at least 4% annually. 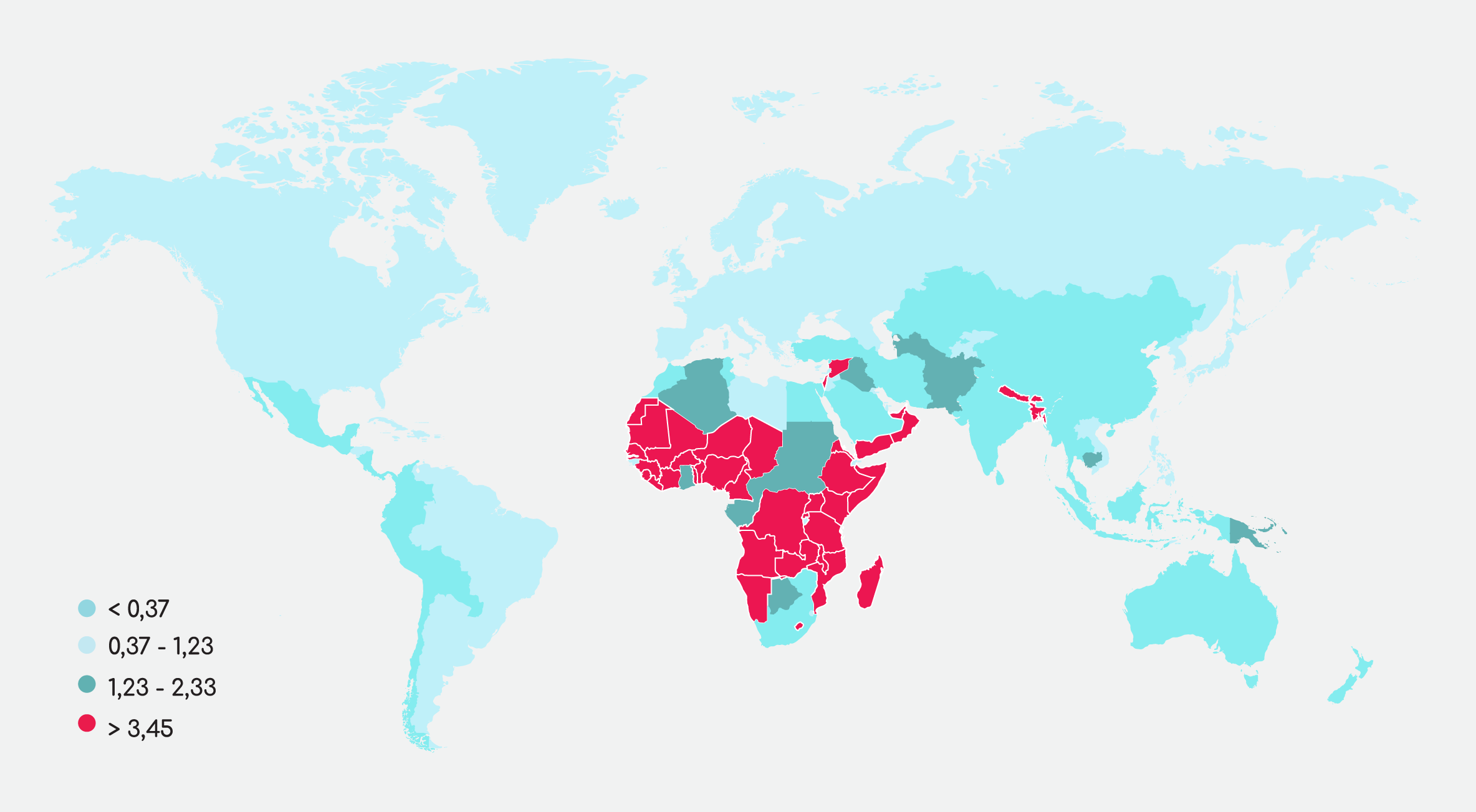 Regarding the blockchain community, the Ethereum ecosystem is currently the biggest in the blockchain space because of its dApp ecosystem. Daily turnovers are in the billions of dollars, with more traditional businesses and organizations moving to the blockchain. The adoption rate is even faster than the internet and mobile phones in their early stages (Levin, 2021). With blockchain on the rise, the outlook for 3air looks increasingly positive.

SKALE might also become the blockchain of tomorrow as it offers an innovative solution to Ethereum’s scalability issues and addresses many of the general shortcomings of Bitcoin and Ethereum.

SKALE addresses the economic issues of high gas fees on the most widely spread blockchain, Ethereum. Such high fees exclude many potential users and reduce the revenues of blockchain businesses. SKALE provides a system with the lowest possible fees (effectively zero gas fees for the end user) and allows for greater inclusion of users.

The culture of a people is what marks them out distinctively from other human societies. For certain, Africa is a region where social and cultural differences differ not only from the rest of the world but also from within the continent. Communication is already a challenge in countries where many languages and dialects are spoken. Values can sometimes differ greatly from the rest of the world, causing entry barriers for foreign businesses. Working tightly with locals and having representative offices are a must. Years of working in Africa has taught us how to relate with local socio-cultural challenges.

Interestingly, the blockchain community within Africa is growing faster than the rest of the world. This is probably due to the wide adoption of smartphones and openness to new opportunities, especially in the financial markets. Blockchain has the potential to fill in the gap of the unbanked and provide equal financial services to everybody.

The blockchain community, in general, is gaining rapid traction even though it is in its early stages. The whole community is still fully engaged and is one of the most active communities in tech. Such communities tend to promote and adopt good projects and reject bad ones. 3air will present itself with full transparency and disclosure to avoid any rejection from the active community.

K3 technology is proprietary, patented, and field-tested, with a presence in 9 countries already. Technologically, we have the advantage with the best suited infrastructure system to provide broadband internet to urban areas of emerging economies. As outlined in the competition section, we have identified 2 major upcoming technologies. Although they are not yet ready and face significant entry barriers into the market, we need to be ready to gain and consolidate our market share before the competition arrives.

Blockchain, as a nascent sector, will undoubtedly see significant changes and improvements in the technological landscape 3air will inhabit. Nonetheless, the funds raised will ensure that we hire tier one development resources to leverage any new developments to our advantage.

By building on SKALE, 3air will take advantage of all its superior features. As the whole project will rely heavily on cheap transaction costs, we will leverage the unique capabilities of SKALE to provide zero-fee transactions for the end user. Additionally, operating in an EVM-compatible environment will allow us to access a vast ecosystem of applications. Adding these resources to our platform will reduce development costs and security challenges.

Tokens can also be exploited and are prone to hacks, prompting our in-depth analysis on this topic. EVM has stood the test of time, and although we see exploits and hacks, they occur on the level of dApps that are not thoroughly tested, code auditing, or patching known security flaws. Ethereum and its ERC20 token standard are one of the most secure assets to date.

3air has sought expert legal counsel in all its proceedings regarding jurisdiction selection, token launch, and distribution. We used this counsel to set up all the required systems for a fully legal and transparent token sale and for all ongoing and future operations.

Choosing favorable jurisdictions to operate in collaboration with a high-level legal partner will provide a safe and stable environment for 3air and help map out the exact boundaries of operations.

In accordance with our political analysis, regulatory changes are bound to occur. We have set aside funds for legal counseling and actions in the event that such changes affect 3air operations.

3air takes environmental challenges very seriously. Our technology is designed around low power consumption as it is also one of our main operating costs. We will seek out renewable energy sources from local markets to our maximum capabilities.

3air aims to launch and operate at neutral carbon levels.

Regarding technology, there have been some questions about the environmental footprint of existing blockchains, especially Proof of Work (PoW) security mechanisms that devote large energy resources to trivial calculations in an effort to keep the blockchain safe and secure.

We have been reluctant to build our project on such blockchains as it would go against our core principles. We have chosen the SKALE blockchain, which uses a new, secure, and environmentally friendly security mechanism called Proof of Stake (PoS). Additionally, Ethereum, SKALE’s settlement layer is also committing efforts to progress to an energy-efficient PoS.

We make it our mission to care for and nurture the world we all live in. As a platform provider for internet and TV services, we aim to educate local communities about environmental issues and their responsibilities.